It's going to be good weather this Friday and we have two very special readers!

Alp Beck was raised in Italy and Cuba, the product of an Italian artist/actress and a  Cuban opera singer.  As such, she had no choice but to become a writer of horror. She writes in all mediums but prefers terror; she has had essays published in the NY Times and the NY Blade.  Her upcoming novella, FRESH, will be coming out in 2018. She is hard at work on a series of short stories, including EYEWITNESS (release date 2018) and THE UNDERRIDE, a project with her co-writer, Laurie Jones. You can find her work in April Grey’s short story anthology, Hell’s Grannies. Her latest short story, HEELS will be coming out later this year.

April Grey has two urban fantasy novels out: Chasing The Trickster and St. Nick’s Favor. Her third novel, Finding Perdita is due out from Caliburn Press “Any Day Now.” Her short stories have been published on line and in print anthologies. Many of these stories can be found in her collections, The Fairy Cake Bake Shoppe and I’ll Love You Forever. She edited about 20 novels for Damnation Press and is the editor of the Hell’s series. All are available through Amazon and Smashwords.

April A/K/A Avril when she isn't writing also volunteers at Oasis Community Garden. She and her family live in Hell's Kitchen, NYC in a building next to a bedeviled garden. Gremlins, sprites or pixies, something mischievous, lurks therein. Someday she'll find out. 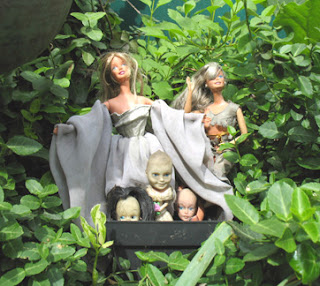 Next week 7/28 We will have Steven Van Patten and Marc Abbott reading. Please come back then!

Oasis is a GreenThumb Garden